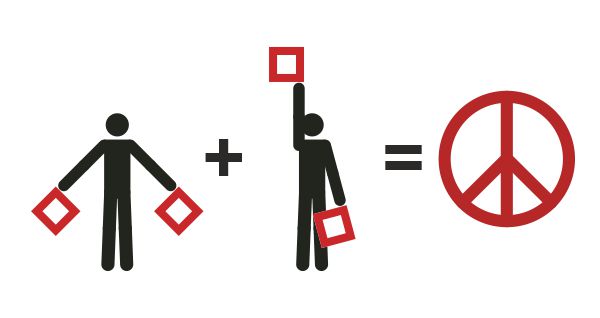 The peace sign, a symbol known for the movement towards nuclear disarmament, may have more background than is generally thought to be possible. The matter seems quite clear at first. In the 1950s Gerald Holtom, British designer and graduate of the Royal College of Arts in London, developed a symbol for the nuclear disarmament movement based on the initials N and D for Nuclear Disarmament from the flag alphabet and a circle as a symbol for the world. Since 1958, the symbol has been seen in all actions of the “Campaign for Nuclear Disarmament”, or CND for short, and not only there, but everywhere where a stand against war and for disarmament is to be taken.

But since people have been expressing themselves in whatever way, there are others who interpret this statement or speculate about its true meaning:

inverted cross of the Antichrist,
a symbol of death

Crow’s foot or witch’s foot,
a symbol of war and doom

Footprint of a chicken,
a symbol attributed to fear and cowardice

Greek spelling for Christ,
a composition of the letters X (Chi) and P (Rho)

Nero Cross (Emperor Nero 37 – 66 A.D.) of the Roman persecution of Christians in the 1st century, symbolizing the apostle Peter crucified upside down

Rune of death,
which the Nazis used on the base of the old Germanic YR runes on gravestones of SS officers

In the “Book of Signs”, a standard source of medieval symbolism, the YR rune shows a remarkable similarity to Holtom’s peace sign. The designer was well aware of the book and its interpretation. He had already oraculated at the presentation of the peace sign: “The broken cross could also mean death, combined with the circle it represents the terrible danger of nuclear weapons for mankind”.

Holtom later said of its creation: “I drew myself: A desperate man, with the palm of my hand outstretched outward and downward. Similar to Goya’s painting, the farmers in front of the firing squad.” Perhaps Holtom was annoyed or frightened by the circulating interpretations of his symbol and tried to lay the foundation anew. Unfortunately only with moderate success, because Goya’s peasants pulled their arms up.

Some speculations may be understandable. But do the alternatives play a role? The important thing is that it is probably a general convention that the peace sign is associated with an attitude against war and for disarmament. 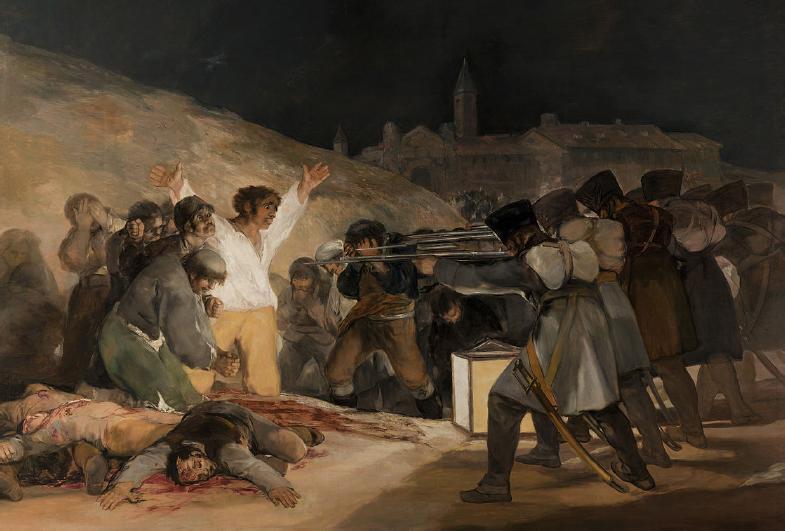 For the flag alphabet, the ISO 3894 man is of course also very helpful. In the groups for the arms only the flags were added, with an outline inside and the property Scale with object.

The peace sign itself is graphically trivial and can be created with basic objects.